The  “Campaign Against Torture in India” while releasing  “India: Annual Report on Torture 2018” on the United Nations Day Against Torture stated that during 2018, a total of 1,966 custodial deaths were reported to the National Human Rights Commission (NHRC) including 147 deaths in police custody and 1,819 deaths in judicial custody. These figures do not reflect the extent and actual incidents of custodial death and torture in the country”, warned the report. 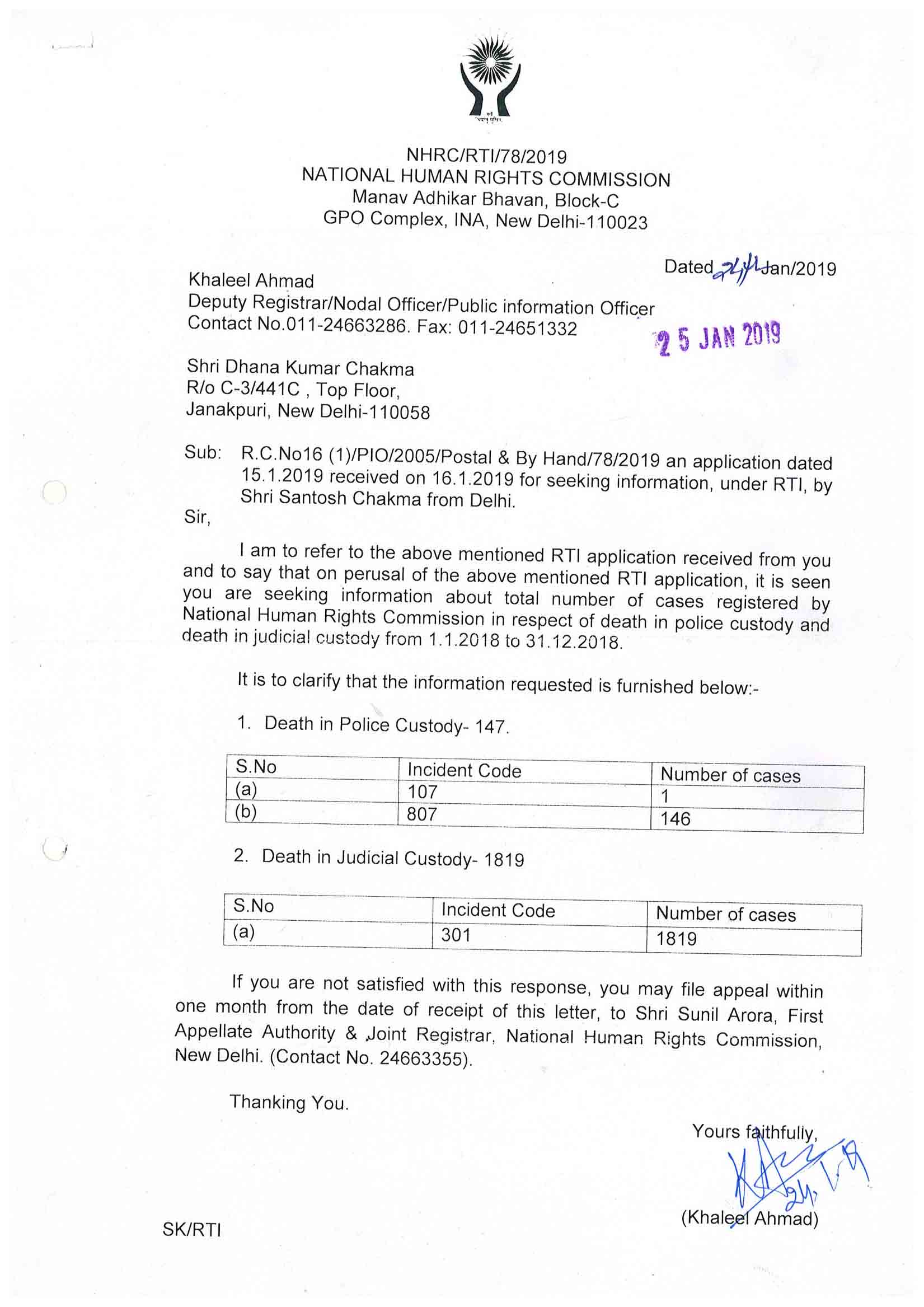 During 2018, police claimed that majority of the custodial deaths took place after the victims suddenly developed medical complications soon after being taken into custody. Police also claimed the detainees suffered injuries while trying to escape and later succumbed to the injuries and further that the victims were beaten by mob/public prior to their arrest/detention. The prison officials also claimed that many victims committed suicide by consuming poison, banging their heads till death, hanging with a piece of cloths, wire, belt, rope, etc.

The police made the bizarre claim that Sitrarasu, a junior assistant in the education department and a resident of Chunambedu of Tamil Nadu had hanged himself – using his innerwear on 2 May 2018![1]

The prison  officials claimed that Guddu alias Bhanu Pratap, aged 30 years, an undertrial prisoner, hanged himself with his gamcha (towel) inside the toilet of barrack No. 7 in Raebareli district Jail in Uttar Pradesh on 14 October 2018, but the media reported that the deceased had lost his right hand in an accident three years ago[2] and could not have committed suicide.

“The fact remains many were tortured to death for the failure to pay bribe including in front of the relatives. Victims were also tortured to extract confessions.” – stated Suhas Chakma, Coordinator of the  “United NGO Campaign Against Torture”.

Dalits and indigenous peoples remain extremely vulnerable to torture and during 2018, many died in police custody after being arrested in cases related to alleged theft or robbery. Custodial torture of women including rape is reported regularly in India despite various judicial pronouncements for their safety. Majority of the victims of custodial deaths among women belonged to weaker section of the society such as Dalits, tribals and the poor who mostly worked as domestic help or did petty jobs to earn a livelihood.

The non-implementation of the Juvenile Justice (Care and Protection of Children) Act means that children are often illegally detained at Police Stations and prisons, and subjected to torture.  On 13 April 2019, a 17-year-old juvenile died at JJ Hospital in Mumbai in the custody of Government Railway Police (GRP), Wadala, after being apprehended by the Railway Protection Force (RPF) on 3 April on suspicion of theft and handed over to the GRP the next day.

The armed forces deployed in armed conflict situations and border areas also resorted to torture. The Border Security Forces (BSF) personnel were accused of kicking on testicles of the male victims including juveniles. On the night of 21 November 2018, at around 2 AM, Sarif Sekh, a 10th standard student of Fatullapur High School, was reportedly caught by the BSF when he went to a nearby open field to defecate at Fatullapur under Raghunathgunj Police Station in Murshidabad district of West Bengal. Despite identifying himself as a student, he was allegedly tortured by Subedar Sujoy Singh Rana, Sub Inspector Anil Kumar, and Assistant Sub Inspector C.R Tarki, posted at Bhagirathi Patlatola Border Out Post (BOP) of 180th Battalion, BSF, ‘F‘ Company. Apart from hitting with stick and rifle butts, the BSF personnel allegedly kicked on the victim’s testicles, due to which he became unconscious.

The armed opposition groups also continued to perpetrate torture. The Maoists subjected the people it suspects as government agents to summary executions after trial in socalled “Jan Adalats” (Peoples’ Courts) and tortured them before killing to instil fear among the people.

In Jammu and Kashmir, on 8 March 2018, a Class XII student identified as Omais Rashid Bhat, a resident of Qaimoh in South Kashmir’s Kulgam district, was allegedly abducted by militants and tortured on the suspicion of being an informer of the security forces. After battling for his life for 14 days, he succumbed to the injuries in a hospital in Srinagar on 22 March 2018.

During 2018, the NHRC alone issued orders for compensation of Rs 8,52,95,000 in cases of torture and custodial deaths. However, these interventions did not have the necessary and desired impact to act as deterrent to torture.

“Impunity and absence of national anti-torture law perpetuate torture. Government officials or members of the armed forces enjoy impunity under Section 197 of the Code of Criminal Procedure and Section 6 of the Armed Forces (Special Powers) Act, 1958 and its analogous provision in Jammu and Kashmir. The fact that Manipur government has refused to give sanctions for prosecutions after the Central Bureau of Investigation filed charge sheets in seven cases of torture and extrajudicial executions in Manipur shows the State support to torture and executions.” – further stated Mr Chakma.

The “Campaign Against Torture in India”  described the government of India’s  failure to ratify the UN Convention Against Torture and enact a national law against torture as a disgraceful case of non-implementation of the recommendations of the National Human Rights Commission, assurances given by the Government of India to the Lok Sabha on 3 May 2000; three assurances given to the UN Human Rights Council in 2008, 2012 and 2017; failure to present two Prevention of Torture Bills respectively drafted by the Parliamentary Select Committee of the Rajya Sabha in December 2010 and the Law Commission of India in October 2017 before the Parliament, and false assurance given to the Supreme Court of India during the hearing of the Writ Petition (Civil) No. 738/2016 on 27 November 2017 to act on the Prevention of Torture Bill drafted by the Law Commission of India.

The Campaign Against Torture urged India to take measures to abolish torture in India by ratifying the UN Convention Against Torture, enactment of a national law against torture and end impunity for the perpetrators of torture.

[1]. Death in police custody: SHRC issues notice to Tamil Nadu govt, The Times of India, 3 May 2018, available at https://timesofindia.indiatimes.com/city/chennai/death-in-policecustody-

The State of Encounter Killings in India

Torture: India’s Self Made Hurdle to Extradition

As this report, “Torture: India’s Self Made Hurdle to Extradition“, is released today on 10th December 2018, the Government of India is awaiting the judgment of the Chief Magistrate Court, London, United Kingdom (UK) on its request for extradition of poster boy of India’s economic fugitives, Vijay Mallya. During the hearing, Mallya, inter alia, had […]

Download the Full Report “Torture Update India”, released today, the 26th June, the International Day in Support of Victims of Torture 2018, states that a total of 1,674 custodial deaths including 1,530 deaths in judicial custody and 144 deaths in police custody took place from 1 April 2017 to 28 February 2018 as per the […]