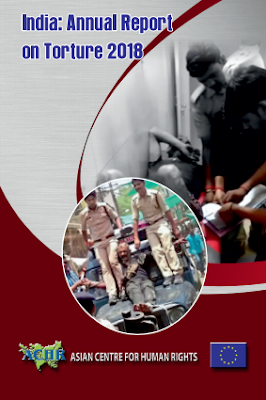 Counterview Desk
A European Commission (EU)-funded report, “Campaign against Torture in India: Prevention, Accountability and Rehabilitation”, has regretted that, despite a sharp rise in deaths caused by torture, the Government of India has failed to frame a law on custodial torture and inhuman treatment, even though India is a signatory to the United Nations’ convention on torture.
The report, titled “India: Annual Report on Torture 2018”, published by the Asian Centre for Human Rights (ACHR), and is part of an EU programme, European Instrument for Human Rights and Democracy, which aims “to promote and support human rights and democracy worldwide”, comments, “As India refuses to criminalise torture, the increasing incidents of torture are no surprise”.

While internal armed conflicts have substantially reduced in the North East India and the Naxalite conflict is on the wane, the Maoists were responsible for brutal killing of their hostages after abduction. The suspects were subjected to summary trial in socalled “Jan Adalats” (Peoples’ Courts) in full public view and tortured before being killed to instil fear among the people.
On May 27, 2018, Vanjami Sukda, aged 45 years, was reportedly kidnapped and killed by the Maoists after slitting his throat on suspicion of being a police informer near Punpalli village under Dornapal Police Station in Sukma district of Chhattisgarh.
In Jammu and Kashmir, on March 8, 2018, a Class XII student identified as Omais Rashid Bhat, a resident of Qaimoh in South Kashmir’s Kulgam district, was allegedly abducted by militants and tortured on the suspicion of being an informer of the security forces. After battling for his life for 14 days, he succumbed to the injuries in a hospital in Srinagar on March 22, 2018.
Other non-State actors continued to perpetrate torture. The Dalits continued to face torture and other inhuman and degrading treatment at the hands of the upper castes. The incidents of caste atrocities continued to remain high with 39,408 reported cases during 2013; 40,401 reported cases during 2014; 38,670 reported cases during 2015; and 40,801 cases during 2016.
During 2018 the Dailts were killed, attacked, tortured, and subjected to other forms of cruel, inhuman or degrading treatment or punishment by the members of the upper castes, among others, for riding a horse or owning a horse; sitting crossed-legs; fetching water from common sources such as well; swimming/bathing in the swimming pools; participation or watching of Hindu religious festivals; sporting moustaches; wearing jeans, shirts, gold chain or shoes; pasting stickers of symbols like Shivaji on their motorcycles; riding a motorcycle; having love affairs with upper caste girls/women; sitting on a chair at the village panchayat office; seeking information from their upper caste employers; refusal to serve/work for upper castes; objecting to casteist remarks/slurs; or on mere suspicion of theft.
On October 18, 2018, a Dalit man identified as Asaram Meghwal, aged 22 years, was beaten to death by members of upper caste for an alleged love affair with an upper caste girl at Satra village in Churu district in Rajasthan. The police arrested two accused identified as Shrawan and Dinesh Jangid of Satra village.
The Courts, the National Human Rights Commission (NHRC) and the State Human Rights Commissions (SHRCs) have intervened in a number of cases to provide justice and reparation to the victims, or their family members. The NHRC alone issued orders for compensation of Rs 8,52,95,000 in cases of torture and custodial deaths.

However, these interventions did not have necessary and desired impact to act as deterrent to torture. Impunity and absence of national anti-torture law perpetuates torture and other cruel, inhuman or degrading treatment or punishment. Government officials or members of the armed forces continued to enjoy impunity under Section 197 of the Code of Criminal Procedure (CrPC), Section 6 of the Armed Forces (Special Powers) Act, 1958 and its analogous provision, Section 7 of the Armed Forces (Jammu and Kashmir) Special Powers Act, 1990.
As a result, the Central Bureau of Investigation (CBI) despite orders from the Supreme Court has not been able to prosecute accused members of the armed forces because of the refusal by the State government of Manipur to provide sanction for registration of FIRs in cases of fake encounter killings in Manipur.
On December 18, 2018, the CBI wrote to the Chief Secretary, Government of Manipur, stating that despite repeated requests, sanction of prosecution in seven cases of extrajudicial executions by the security forces in Manipur had not been received from the State government of Manipur although charge sheets had been filed in the concerned trial Courts by the CBI.

The failure to ratify the United Nations Convention against Torture (UNCAT) and enact a national law against torture has been a disgraceful case of non-implementation of the recommendations of the National Human Rights Commission, assurances given by the Government of India to the Lok Sabha (lower house of the Indian Parliament) on May 3, 2000; three assurances given to the UN Human Rights Council in 2008, 2012 and 2017; failure to present two Prevention of Torture Bills respectively drafted by the Parliamentary Select Committee of the Rajya Sabha in December 2010 and the Law Commission of India in October 2017 before the Parliament, and false assurance given to the Supreme Court of India during the hearing of the Writ Petition (Civil) No. 738/2016 on November 27, 2017 to act on the Bill drafted by the Law Commission of India.
Aggrieved by false assurance given to the Supreme Court, former Union Law Minister of India Dr Ashwini Kumar once again moved a Miscellaneous Application to W.P.(C) NO.738/2016 before the Supreme Court seeking a direction to the Centre to frame a law on custodial torture and inhuman treatment, as India was a signatory to the United Nations’ convention on torture. The Supreme Court has reserved its judgement.
As India refuses to criminalise torture, the increasing incidents of torture are no surprise.
Share the story

Justice for Jayaraj and Bennix Means Ending a Culture of Impunity, The Wire

The Wire 02 July 2020 Cases of justice being served in police killings are the exception rather than the rule across India. The brutal deaths of a father-son duo in judicial custody in Tamil Nadu’s Tuticorin district have sent shockwaves across the country and the globe. On June 18, Sathankulam police admonished J. Bennix (32) for […]

The Straits Times Published on 20 March 2020 NEW DELHI – Four rapists convicted for the gang rape and murder of a 23-year-old woman on a moving off-duty private bus in Delhi in 2012 were hanged Friday morning, bringing to close a long-drawn and painful case in India. The brutal assault triggered widespread outrage across the […]

Justice News  Published on 27 June 2020 A total of 1,731 people died in custody in India during 2019. This works out to almost five such deaths daily, according to a report by a rights group released on Friday. Timed with the International Day in Support of Victims of Torture, ‘India: Annual Report on Torture […]