In the last 10 years, the majority (69 per cent) of 1,004 deaths in police custody have been attributed to either illness and natural causes (40 per cent), or to alleged suicide (29 per cent), in National Crime Records Bureau (NCRB) data.

Details on whether deaths by illness are because of a prolonged or sudden illness, or whether hospitalisation is linked to conditions/circumstances in custody, or owing to assault in custody, are not provided in the NCRB’s annual Crime in India (CII) reports, the key central government database.

More deaths by suicide in police custody have been reported over the past decade, with 36 per cent reported as suicides during 2015-2019. In some cases, however, families have alleged foul play, or that suicides were prompted by custodial torture, a review of media reports suggests.

Physical assault by police has been recorded only from 2014 onward, and in just 6 per cent of cases. In 2019, only 2.4 per cent of the 85 deaths in police custody were attributed to assault by police in the CII report for that year. However, 76 per cent of 124 deaths in police custody documented during the same year by the NGO platform National Campaign Against Torture, were attributed to torture or foul play.

The law requires that every death in custody be enquired into individually. CII data on inquiries into death in police custody, however, does not specify if one person died in a given case or more, which leads to some discrepancy in the records. For instance, in the case of the two traders, P Jayaraj and J Bennicks, who died in police custody in Thoothukudi, Tamil Nadu, in June 2020, one case pertains to two deaths. 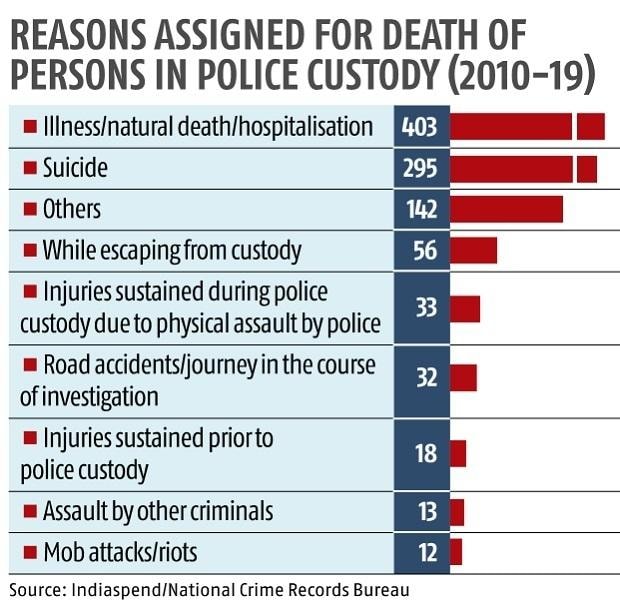 Time8 Published on 26-June-2020 By Debananda Medak Out of the 125 deaths in police custody, 75 persons or 60% belonged to the poor and marginalised communities Guwahati:  The National Campaign Against Torture (NCAT) in its ‘India: Annual Report on Torture 2019’ released On Friday, on the occasion of the International Day in Support of Victims […]

Nobody knows how many Indians die in custody because official figures vary wildly, National Herald

National Herald 03 November 2020 By MY Siddiqui When law enforcement agencies become perpetrators of violence, it becomes an ominous abuse of authority and custodial deaths unacceptable excesses by police force on citizens. Types of torture by the police documented in India include hammering iron nails in the body, hitting private parts, electric shocks on genitals, […]