LUCKNOW, India — A top suspect in dozens of crimes, including the killings of eight police officers last week, was fatally shot Friday in police custody while allegedly trying to flee, officials said.

Vikas Dubey snatched a gun from officers after their vehicle overturned on a highway near the northern Indian city of Kanpur and tried to flee, said police officer Mohit Aggarwal. He said Dubey died in an exchange of gunfire.

Dubey, in his 40s, had given himself up in the central town of Ujjain on Thursday after a weeklong search. He was being driven in a police convoy to Kanpur where the eight police officers were killed.

He is believed to have links with state politicians and the police. Two police officers were arrested this week for allegedly tipping him off about a police raid on his home last Friday.

Amarnath Aggarwal, an opposition Congress party leader, accused police of killing Dubey. “It’s a preplanned murder. It was committed with the motive that Dubey did not reveal the names of people who provided patronage and protection to him.”

Deaths in police custody are not isolated incidents in India.

A report last month by a New Delhi rights group, the National Campaign Against Torture, said at least 1,731 people died in custody during 2019, which means five custodial deaths a day.

Vladimir Voronkov told a news conference Thursday that the people, including children, died of “lack of medicine, lack of food” at the al-Hol and Roj camps, which are overseen by Kurdish-led forces allied with the United States who spearheaded the fight against the extremist Islamic State group.

Voronkov did not clarify when the 700 reportedly died or what the source of the information was. The Kurdish Red Crescent said in January that 511 people died in the largest camp, al-Hol, in 2019. The overcrowded camps have a high child mortality rate. So far, there has been no known outbreak of coronavirus in the camps. A U.N. team visited the largest one earlier this month.

Voronkov urged the international community to tackle “the huge problem” of what to do with these people, saying keeping them in camps “is very dangerous.” He warned that “they could create very explosive materials that could be very helpful for terrorists to restart their activities” in Syria and Iraq.

In addition to the al-Hol and Roj camps, the Kurdish fighters are guarding thousands of ISIS fighters and boys in prisons.

No swimming pool or organic garden on the roof of the medieval Paris monument, or contemporary glass spire, or other modern twists. And to stay historically accurate, it will again be built with potentially toxic lead.

That’s the verdict reached by French President Emmanuel Macron, the cathedral’s present-day architects and the general in charge of the colossal reconstruction project for one of the world’s most treasured landmarks.

The plan includes recreating the 19th century spire designed by architect Eugene Viollet-le-Duc that collapsed in the fire and “favors fidelity to the monument’s form and a restoration of the cathedral in its latest state,” the statement said.

The reconstruction plan presented Thursday says the project will replicate original materials “to guarantee the authenticity, harmony and coherence of this masterpiece of Gothic art.”

Those materials included tons of lead, which is raising concerns among health and environmental groups.

Death toll up as Japan braces for deluge

TOKYO — Parts of Japan still searching for missing people and evacuating those stranded by deadly floods and mudslides were bracing for more pounding rains through the weekend.

The death toll has risen to at least 66 as of Friday morning, with about 16 others still missing, the Fire and Disaster Management Agency said. Most of them are in prefectures on Kyushu, Japan’s third-largest main island.

The damage has spread beyond Kyushu into central Japan’s scenic mountain villages known for hot springs and hiking.

Search and rescue work continued in Kuma village, where nine people are missing and the effort has been delayed by deep floodwater and the risk of more mudslides. People isolated by the flooding are still being airlifted to safety.

The Meteorological Agency has issued evacuation advisories in Nagasaki and other areas on the Kyushu region due to continuing downpours. In all, more than 1.2 million people have been urged to evacuate, though it is not compulsory. 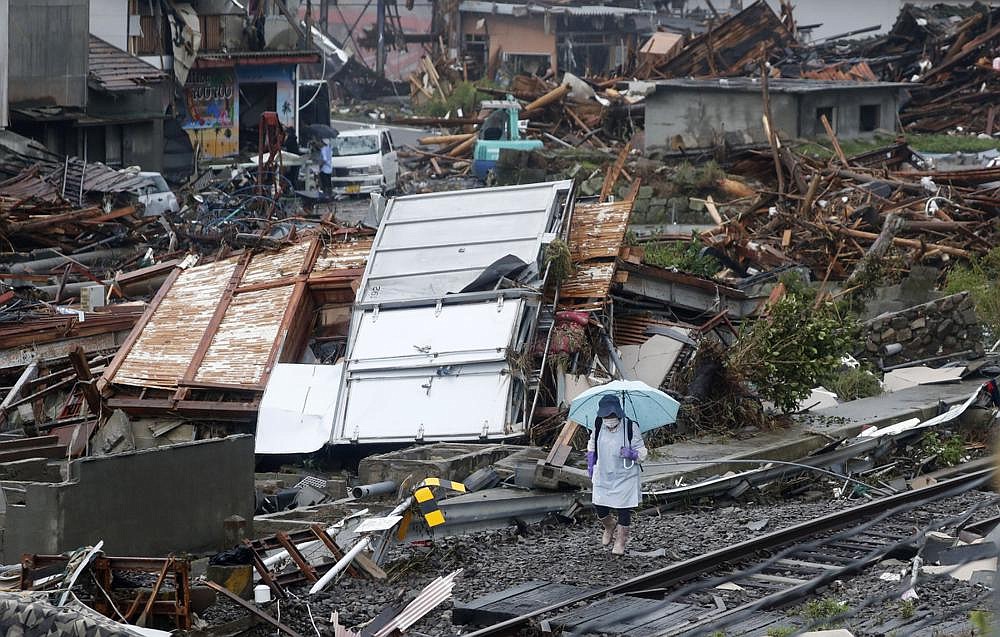 The Hindu 19 March 2020 ‘They are defined as illegal immigrants, shall remain liable for deportation’ A New Delhi-based rights group has said that the Citizenship (Amendment) Act, 2019 has made about 6,00,000 refugees in India forever stateless and vulnerable to refoulement. The CAA prescribes citizenship for six non-Muslim communities which took refuge in India from Afghanistan, Bangladesh […]

The enemies within, The Pioneer

The Pioneer 03 July 2020 By Ajoy Kumar For the sake of better governance, police reforms are a must. But more than anything else, our forces need an attitudinal change. The police-public relationship needs an overhaul Sir Robert Mark, a legendary police officer in the UK, who cleaned the Metropolitan police of corruption and who […]